Be the first to review this product
$3.99
In stock
SKU
DirtySecretsPDF

eBook Summary: This book provides a compendium of insights into many of America's nastiest intrigues of the 20th century, to include FDR's foreknowledge about Pearl Harbor, the deliberate Israeli attack on the U.S.S. Liberty, how the Federal Reserve is not "Federal," the Oklahoma City bombing, how the Mossad is linked to the Martin Luther King assassination, and other dark portents beneath the crumbling facade of today's overleveraged "Great Society" of the "New World Order."

Piper afficianados will also find much of value in his personal interviews with Victor Thorn and Lisa Guliana about his other works carried at America First Books such as High Priests of War and The New Jerusalem. 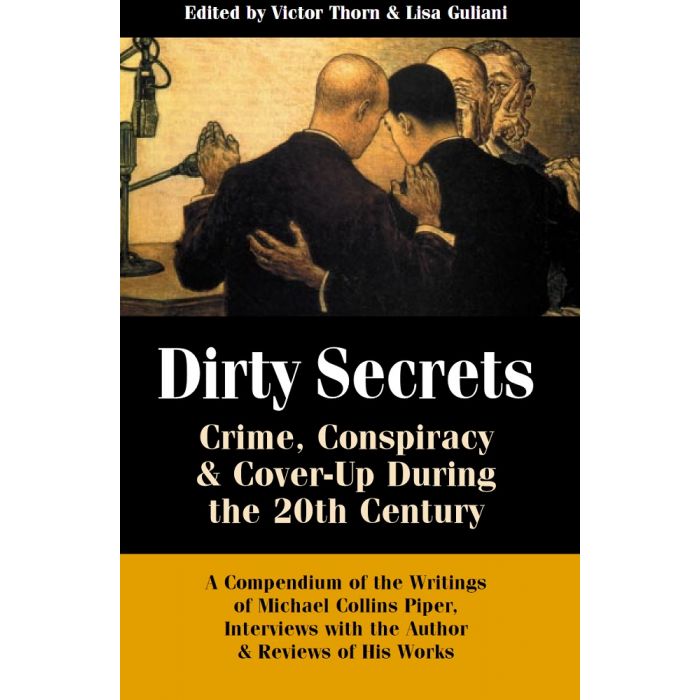 Mordechai Vanunu, the man who blew the whistle on Israel’s illegal nuclear weapons program and served 18 years in an Israeli prison for doing so, has called Michael Collins Piper one of the most “brave and honest” journalists writing today. And now, at long last, “the best of” Michael Collins Piper has been gathered together in one place! This collection includes essays not found on the Internet, previously unpublished writings, interviews (including the long-lost Final Judgment tapes), reviews and insights into the JFK assassination, the Oklahoma City bombing, the Federal Reserve, FDR and Pearl Harbor, Israel’s deliberate attack on the USS Liberty, Israel and Islamic fundamentalism, the murder of Martin Luther King, the Holocaust and much, much more. Besides the essays by Piper and the Piper interviews, this book also includes synopses of Piper’s three major works—Final Judgment, The High Priests of War and The New Jerusalem.

From the back cover of the soft cover edition of Dirty Secrets:

High Praise for the Work of Michael Collins Piper

Amazon reviews of the softcover edition

Showing 1-2 of 2 reviews
derek fulton
1.0 out of 5 stars michael collins piper was a holocaust denier
October 8, 2019
Format: PaperbackVerified Purchase
In chaper four of this book is an american indian heritage speaks out the holocaust is over enouth is Enough And Said It All He Was A Very Deceitful Man I Studie Logical Fallacies So Far I Have Found Over 300 Of Them So David Duke You Are Next On List I Will Exspose You As A Con Man
Helpful
Comment Report abuse
The Swan
5.0 out of 5 stars Well Done!
July 20, 2007
Format: Paperback
This work stands as more or less of an anthology of many of the nefarious deeds that have been perpetrated over the years on behalf of political Zionism. Now Author Piper could even be charged with being obsessed with this issue. However, his work here is well documented and compelling.

An added bonus of this edition is that we are favored with an excellent introduction from Mark Glenn and some very interesting articles from Victor Thorp. From these writings, we have now discovered two more excellent expositors of the truth. And for that, we are most grateful.

The writing is crisp and economical. Pick up this important work. And be both well informed and entertained.