False Flags: Template for Terror; An Analytical Critique of the Covert Model Utilized by Israel's Mossad in Orchestrating 9-11, the Oklahoma City Bombing and the Assassination of John F. Kennedy by Michael Collins Piper (PDF download)

Be the first to review this product
$3.99
In stock
SKU
FalseFlagsPDF

Here’s the never-before-explained “template for terror” first used in the JFK asssassination and later in the Oklahoma City bombing and the 9-11 tragedy that followed . . .

In the works for over a decade, this is the one book that points the definitive finger of blame at the singular force behind the major terrorist conspiracies that have rocked America in modern times . . .

Don’t let them confuse you as they did with 9-11, the OKC bombing, and the JFK assassination . . .

Immediately after the assassination of President John F. Kennedy a few honest investigators began digging into what really happened on Nov. 22, 1963. In the years that followed, there was a deliberate attempt by the controlled Media Monopoly to smear the honest researchers at the same time a flood of misinformation and disinformation about the assassination was deliberately injected into the public domain.

All sorts of misleading “theories” and phony “research” muddied the waters, redirecting attention away from WHO was responsible and into focusing instead into endless competing and distracting arguments about HOW the assassination was carried out.  As a consequence, truth seekers got bogged down in complicated discussions about how many shots were fired, where those shots hit JFK and how many assassins were involved.

The same type of thing happened after the Oklahoma City bombing and then with 9-11 and it even took place during the past year in the wake of the tragedies at Sandy Hook and Boston.

There has been a plethora of theories relating largely to inconsequential details about how these conspiracies were orchestrated and the consequence has been that much of the independent research has become bogged down in forensic and scientific debate (much of it actually ill-founded).

The result is that even many Americans who suspect there’s something wrong with the U.S. government’s “official” versions of “what happened” in these cases begin to reject the idea that real conspiracies were behind these events. The truth seekers are dismissed as “nuts.”

Finally: the one full-length book that cuts to the chase and says WHO orchestrated these events and explains the “template for terror” and the insidious propaganda measures used to CONFUSE good Americans from ever seeing the truth.You’ll be astounded at what you learn . . . 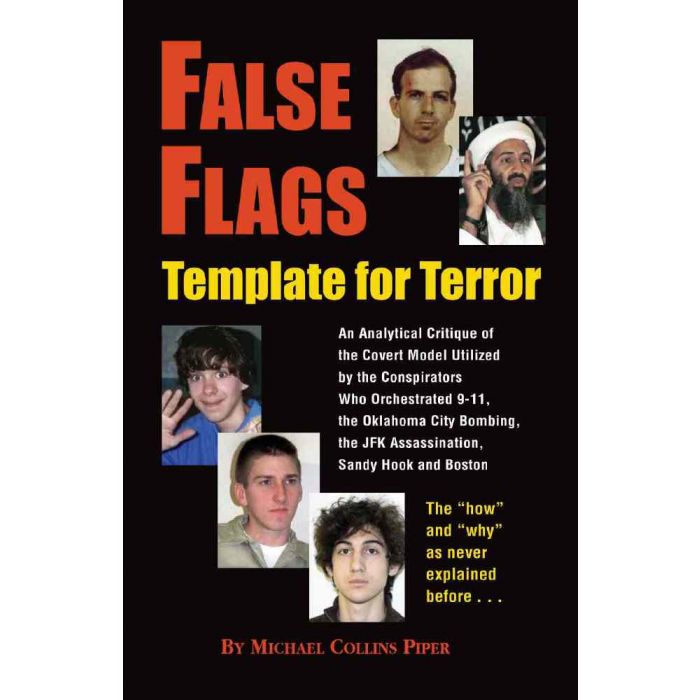 From the advertisement for False Flags: Template for Terror that appeared in American Free Press, Page A-2 to Page A-3, Volume XIII, Number 40, October 7, 2013:

The “Template for Terror” Used Again & Again to Wage War on America!

FALSE FLAGS ties together the greatest conspiracies of our time in a way that will astound you: This book not only outlines the covert model utilized by the criminals responsible but also dissects the propaganda they used to confuse us . . .

JFK Most independent JFK researchers will ONLY say: “LBJ did it” or “the Mafia did it” and some will even insist that “the Nazis killed John F. Kennedy.” FALSE FLAGS says otherwise . . .

9-11 Most independent 9-11 researchers will ONLY say: “Bush and the CIA did it” or “Bush knew it was coming and let it happen” or “Bush bungled and then covered it up.” None of this is true. FALSE FLAGS shows WHO did it and pre cisely HOW they did it . . . Forget about all of the distractions and misdirections that have been frustrating serious 9-11 research for years!

OKC Most Oklahoma researchers will ONLY say: “The FBI did it” or “the BATF did it.” Some will say it was a “sting gone bad” and some claim “Tim McVeigh was working with the Arabs.” Here’s what REALLY happened . . .

SANDY HOOK & BOSTON . . . All new material you’ve NEVER heard about until now. The shocking story of how high-level “Crisis Management” experts manipulated public opinion. And the secret connection between 9-11 and Sandy Hook. You’ll never guess what it is.

You probably didn’t know it, but it was Michael Collins Piper, the author of FALSE FLAGS, who first introduced the concept of “false flag” operations into wide popular parlance in his 1994 underground best-seller, FINAL JUDGMENT. Prior to that, the concept of “false flag” operations was little-noted. Since the release of FINAL JUDGMENT—and then, especially in the wake of 9-11—thousands of other writers have followed Piper’s path and now the term “false flag” is widely linked to 9-11, but few have been willing to follow the right direction in exploring the origins of the false flag trickery in the 9-11 attack on America. FALSE FLAGS may well be the final judgment on the 9-11 tragedy . . .

WARNING: THIS BOOK IS NO REHASH OF ALL OF THOSE CONSPIRACY THEORIES YOU’VE HEARD BEFORE!

Serious truth-seekers are bogged down and confused by all of the competing theories about 9-11, the Oklahoma bombing and the JFK assassination. FALSE FLAGS takes note of many heretofore suppressed facts ignored by many researchers and explains the “who” and the “why” and the “how” and unveils—for the first time ever—the extraordinary (but little-understood) framework used repeatedly on American soil by the modern-day grand wizards of terror . . . THIS IS THE ONE BOOK THAT EXPLAINS HOW SANDY HOOK AND BOSTON FIT INTO THE BIG PICTURE . . . AND WHAT THIS MEANS FOR THE FUTURE. You need this book to be prepared for what lies ahead . . .

Ratings for the Amazon Kindle version offered on Amazon by America First Books: