I, Robot Entrepreneur by William B. Fox (PDF download)

Be the first to review this product
$3.00
In stock
SKU
I,RobotEntrepreneurPDF

The title "I, Robot Entrepreneur" is meant to be a take-off on the famous "I, Robot" Isaac Asimov story, later the title of the 2004 science fiction movie about a robot revolt in Chicago in the year 2035. However, this ebook takes a serious look at the mobile robotics industry, virtually guaranteed to be a "next new thing" for quite some time. It reflects a major new phase in the ongoing automation revolution; perhaps even the "ultimate phase" of the longstanding industrial revolution. In fact, mobile robotics entails so many scientific and engineering disciplines that many university engineering departments are demanding that their students undertake robot projects.

In the decades ahead, barring set-backs from man-made disasters, mobile robotics will likely be a source of major new job creation as well as almost unimaginable growth in productivity. I, Robot Entrepreneur comprises a summary of new product and technology areas in the robotics field uncovered by the author when he attended several robot shows and exhibitions in 2004. It also addresses "man vs. machine" philosophical issues. One very important issue is the fact that despite tremendous competition from masses of engineers being graduated in China, India, and other emerging countries, mobile robotics is one area where America absolutely cannot afford to fall behind under any circumstances. Imagine if fifteen to twenty years from now, a foreign country has a million robots of human level intelligence, which are in turn working around the clock to manufacture more robots of the same or greater intelligence, and we have nothing to match this?

A free version of I, Robot Entrepreneur is posted online in six parts, beginning with Part One: "Futuristic Glimpse/Expected Growth Trend." Hence, this downloadable pdf file of the same article is a "donation" offering. Please see the "Why donation offering" explanation in the "Sales Policy" section of this web site. 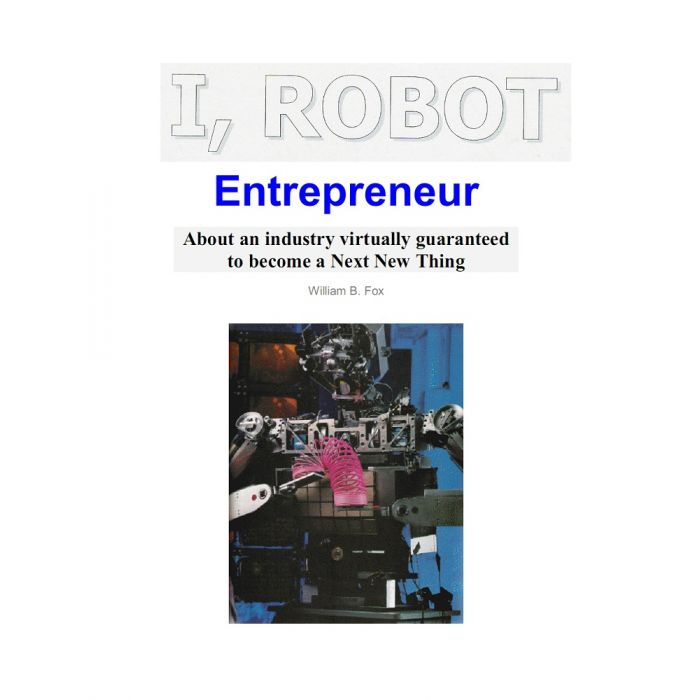 I, ROBOT ENTREPRENEUR
by William B. Fox
First published online in 2005. Approximately 100 pages.
Offered by America First Books as a donation ebook. This six part series is also available for free online.