Be the first to review this product
$4.99
In stock
SKU
Viper'sVenomPDF

eBook Summary: Col Donn de Grand Pre once served at the highest staff level of the Pentagon. He was not only a major arms dealer in contact with Middle Eastern rulers, but also the Pentagon's principal point of contact for Dr. Henry Kissinger and other influential "powers behind the throne."

The front flap to the hardcover edition begins:

PRELUDE TO PANIC
. . .The 9-11 activity and horrific destruction of U.S. property and lives was intentionally meant to trigger a psychological and patriotic reaction on the part of the U.S. citizens which is paving the way for striking key targets in both the Middle East/South Asia and the Balkans.
.. ..The trigger for the 9-11 activity was the imminent and unstoppable world-wide financial collapse, which can only be prevented (temporarily) by a major war, perhaps to become known as WWIII. To bring it off (one more time), martial law will probably be imposed in the United States.
. . .Was there a gigantic cover-up involving high-ranking Cabinet officials — up to and including the president and vice president of the United States — the CIA, FBI, and rogue elements of the military? 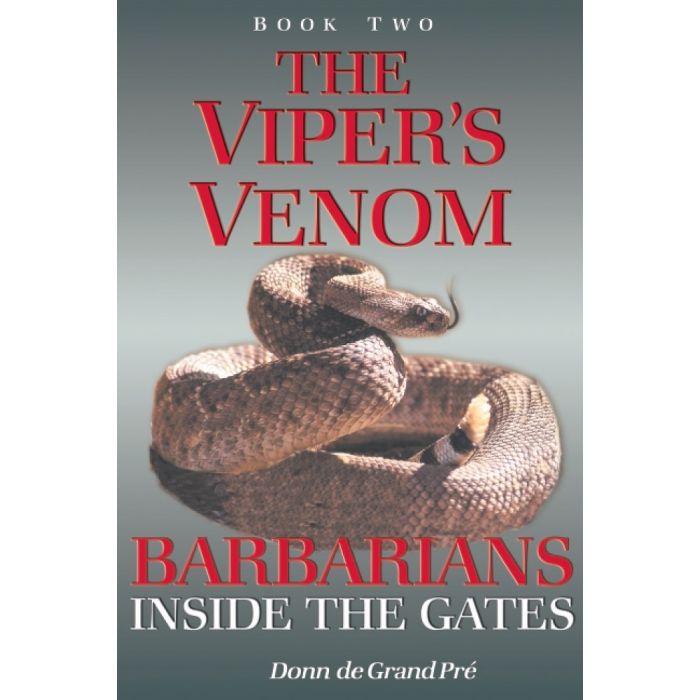 The following appeared in the April 28, 2003 American Free Press:

Did the war party plan a "clash of civilizations?," Is the Wolfowitz cabal the real enemy inside the Gates? Col. Donn de Grand Pre asks some leading questions. Chilling answers can be found in his new book, The Viper's Venom — Barbarians Inside the Gates

Was the official version of 9-11 a hoax? — Is there a direct connection with the War Party's Plan and the tragedies of 9-11? As Pat Buchanan states, "the War Party's plan. . .has been in preparation far in advance of 9-11."

Did the president order an investigation of 9-11? — Henry Kissinger was asked to chair such a gathering, but withdrew after a political storm erupted over his unsavory past.

Were the 9-11 attacks already investigated? — A front page story by a crack investigative journalist was featured on 3 March 2002 in a leading European English language newspaper that boldly refutes the official US Government version of September World Trade Center attack.

The journalist stressed that "no Arab highjackers were on board" and that the four aircraft were "probably piloted by remote control." Additionally, he stated that the top spook agencies "had to be involved."

A group of military and civilian US pilots, under the chairmanship of Col. Donn de Grand Pre, after deliberating non-stop for 72 hours, concluded that the flight crews of the four passenger airliners . . . had no control over their aircraft.

Col Grand Pre: "The so-called terrorist attack was in fact a superbly executed military operation carried out against the USA, requiring the utmost professional military skill in command, communications and control. It was flawless in timing, in the choice of selected aircraft to be used as guided missiles and in the coordinated delivery of those missiles to their pre-selected targets."

Insight by another journalist: An excerpt of an interview by Arnoud de Borchgave, one of our best-known editors-in-chief (head of Newsweek magazine and also of the Washington Times) traveled to Rawalpindi, Pakistan on 26 September 2001 where he conducted an interview with Pakistani General Hameed Gul. An excerpt from that interview (carried in full in The Viper's Venom) follows:

de Borchgrave: So who did Black September 11?

Gen Gul: Mossad and its accomplices. The U.S. spends $40 billion a year on its 11 intelligence agencies. That's $400 billion in 10 years. Yet, the Bush administration says it was taken by surprise. I don't believe it. Within 10 minutes of the second twin tower being hit in the World Trade Center, CNN said Osama bin Laden had done it. That was a planned piece of disinformation by the real perpetrators. It created an instant mindset and put public opinion into a trance, which prevented even intelligent people from thinking for themselves.

Col Grand Pre: "An interesting aside — In 1973-74 I traveled to Pakistan where I met the then Lieutenant Colonel Hameed Gul, a dapper, mustachioed man, erect of carriage and proper military bearing, who was a graduate of Sandhurst Military College, and who spoke impeccable English (with a clipped British accent). I immediately recognized a "comer." We became friends and continue to be so today. Events were to prove that I was correct in my analysis of his potential. I would award him a credibility rating of 90%."

Michael Collins Piper gave The Viper's Venom a bravo review in the American Free Press. He noted that "This is a book that you will want to not just read but study, time and again. It is not a volume for the faint-hearted or for the politically correct, it is a clarion call for the restoration of America's sovereignty and an all out declaration of war by a patriotic American military strategist against the manipulative forces that are pushing our world to the brink of catastrophic destruction and ultimate tyranny." Please see the rest of his review.

13 of 17 people found the following review helpful:
5 of 5 Star Rating: Informative and Sobering Lookat the `State of the Union', July 9, 2005
Reviewer Comments:

This is the third book [Editor's Note: this actually the second book; Amazon also lists this exact same review for Rattler's Revenge which is the third book] in the "Barbarians Inside the Gates" series. There is so much historical information that it took a while to complete, but was worth the time to gain the insight into what has happened to our government since the beginning of the 20th century.

The great value in this book series was the "connecting of the dots" regarding the bits and pieces of confusing information I had acquired over a long period of time. I had previously come to the conclusion that the greatest evil in our country and cause of corruption were the thousands of Washington lobbyists bribing our representatives to act on their behalf contrary to the best interest of the citizens of the United States.

I now believe that the problems in America are far deeper, wider, and advanced than anyone other than a government insider like Col. Donn de Grand Pre could believe and document. He clearly explains why patriotic Americans are in trouble and have been sold out to globalism and the New World Order elites.

Facts are presented that show how Russia was taken over and the resulting Soviet Union has been given our nuclear secrets almost as fast as we discovered them, and infiltrated most controlling departments in goverment with the help of the Council on Foreign Relations

If you feel that you are being lied to by the media, the President, the Secretary of Defense, the Secretary of State, the FBI, the CIA, the Senate, most of the House of Representatives, and everyone else aligned with politically or profiting from their no-bid contracts, you will find that you are correct. The explains the reasons wh terrorist threats are created to gain "emergency" Presidential powers, and why lies are costing us freedom, fair trade, fair taxation, and the lives of our citizens.

After reading this book, you will be able to believe that the global elitists will stop at nothing, not even assasination or bombing their own countrymen, to succeed in controlling the world as tyrants ruling slaves. The end of the psychologically ingrained denial of the facts that the leaders of the United States and the UK could really be organized criminal monsters selling us out as fast as they can may be the only hope for maintaining any democracy at all.

How The Viper's Venom fits into the Barbarians Inside the Gates series:

The Viper's Venom is Book II of the series.
The Serpent's Sting, which is also carried by America First Books, is Book I. It is a suitable companion to The Viper's Venom for those who are satisfied with an abridged version of Book III at a bargain price.
Book III, titled The Rattler's Revenge, contains all the material in Book I plus several additional chapters and appendices.